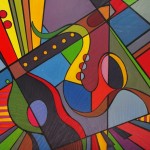 The term form is in music used “to denote a standard type, or genre, and to denote the procedures in a specific work. The nomenclature for the various musical formal types may be determined by the medium of performance, the technique of composition, or by function.”

Texture has to do with the way various musical sounds and melodic lines blend. It is the interrelationship of voices and instruments. When hearing texture in music one must ask oneself how many melodies are occurring and how are they related? The three textures in music are . A composition can start in one texture and move freely into another.

One main melody. (mono=one, phony=sound). A single-line melody unadorned and unaccompanied. Often monophonic texture is not enough information to continue to hold ones attention as an artistic experience. The exceptions are vocal chants such as plainsong and certain pieces sung a cappella such as, Amazing Grace.

Two or more melodies of equal importance played or sung simultaneously. The term frequently applied to polyphonic texture is counterpoint or contrapuntal. There are two types of polyphony.

Harmonies or chords can support a melody by sounding together vertically in time. Or, when two or more melodies overlap, the point of simultaneous sound is where the harmony occurs. That is a more horizontal relationship.

When notes or a chord or harmony sound simultaneously it can produce stability or tension. These two types of harmonies are referred to as:

Harmony that is stable, non active, agreeable, free of tension, blending and resolved.

Harmony that is unstable, in opposition, conflicting, jarring and unresolved. A dissonant chord leaves the listener with a feeling of expectation. It takes a consonant chord to complete the gesture created by a dissonance. Most good music has a combination of consonance and dissonance.

Harmonies move in progressions that help form the key of a piece. Each key is positioned around a tonic and harmony can be formed from the tonic note or any other scale degree. Harmonies can also help to change the key of a composition, when necessary. The processes of changing keys in music is called modulation. Harmony like scales can be major or minor and classical music uses those two primarily but eventually you will hear about or get to know diminished, half-diminished, augmented, dominant seventh and many more types of chords or harmonies.

Form relates to the organization of music, its structure or plan. A compositions ideas in time creates its form. The form of a composition also has to do with its shape, arrangement and relationship of various musical elements. Form is perceived in terms of repetition, contrast, or variation. Form is usually diagrammed with letters to indicate how sections relate to each other through statement, departure or return. Composers need some structure to their pieces. It is easier for a composer to be creative when there is some guideline to follow. Below are some of the basic forms. There are five basic forms for which much of music is organized in.

The musical form having one section only with the same music played or sung on each repeat; diagrammed as A.

In the popular spiritual “Amazing Grace” the changing lyrics holds the listeners attention while the melody stays the same with each verse.

The musical form having two contrasting sections, a first statement followed by a contrasting statement; diagrammed as AB for example the folk song “TwinkleTwinkle Little Star.”

The AB and then return to A section

The musical form or repeating a clearly defined melody (theme) and successively changing it artfully and cleverly without ever losing touch with the original melody. In variation form, as each section re-dresses the main theme, the main theme is always present in the listener’s ear; diagrammed as

Periodic return of a central theme; diagrammed as ABACADA.